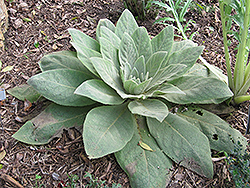 A biennial that produces large, basal rosettes of foliage that are silvery gray; tall, fuzzy, silver-white spikes with lumious yellow flowers rise up in summer; a spectacular border accent

Arctic Summer Turkish Mullein has masses of beautiful spikes of lemon yellow flowers with orange anthers rising above the foliage from late spring to late summer, which are most effective when planted in groupings. The flowers are excellent for cutting. Its attractive tomentose round leaves emerge silver in spring, turning gray in colour throughout the season. The fruit is not ornamentally significant. The silver stems are very colorful and add to the overall interest of the plant.

Arctic Summer Turkish Mullein is an herbaceous perennial with tall flower stalks held atop a low mound of foliage. Its relatively coarse texture can be used to stand it apart from other garden plants with finer foliage.

This plant will require occasional maintenance and upkeep, and should be cut back in late fall in preparation for winter. Deer don't particularly care for this plant and will usually leave it alone in favor of tastier treats. Gardeners should be aware of the following characteristic(s) that may warrant special consideration;

Arctic Summer Turkish Mullein will grow to be about 24 inches tall at maturity extending to 5 feet tall with the flowers, with a spread of 24 inches. When grown in masses or used as a bedding plant, individual plants should be spaced approximately 18 inches apart. Its foliage tends to remain dense right to the ground, not requiring facer plants in front. It grows at a fast rate, and tends to be biennial, meaning that it puts on vegetative growth the first year, flowers the second, and then dies. However, this species tends to self-seed and will thereby endure for years in the garden if allowed.

This plant should only be grown in full sunlight. It is very adaptable to both dry and moist locations, and should do just fine under typical garden conditions. It is considered to be drought-tolerant, and thus makes an ideal choice for a low-water garden or xeriscape application. It is not particular as to soil pH, but grows best in poor soils. It is highly tolerant of urban pollution and will even thrive in inner city environments. This is a selected variety of a species not originally from North America.